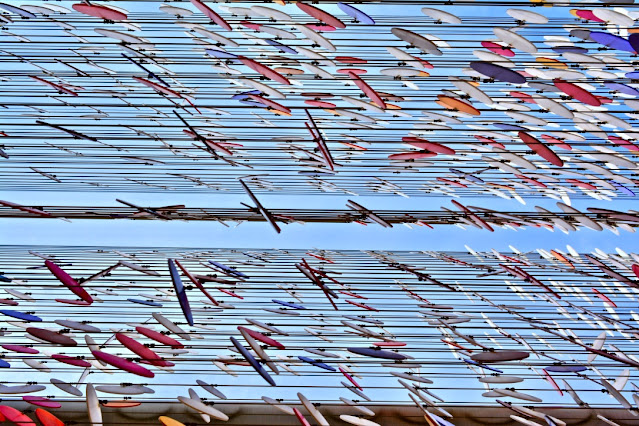 Spanking scene from Starting Over.  This is from Chapter 16.

Violet was first.  She pushed her skirt and panties down with the fishnets, kicking them to the side, then stood up straight and fearless.  Her body was a perfect hourglass, curvy hips marked with fading cane lines, starting at the top of her round bottom, ending mid thigh.  The smug look on her face didn’t change.

“Hands on the chair,” Gabe ordered.

The exaggerated eye roll Violet gave would’ve earned me a hearty swat, but her Dom ignored it as she flattened her palms against the seat and stuck her butt out.  “Can’t believe I’m gettin’ another beating this week!”

Without waiting for her to fully settle, Gabe slapped the leather strap against the center of her bottom.  The loud CLAP! made me flinch and lean into Izaak.  My face reddened as the second swat landed and I noticed everyone watching, reminded that I was next.  With an inaudible whine, I scooted even closer to my roommate, laying my head on his upper arm.

“I’m sure you’ll earn a few more before it’s over.”  His voice was cruel with a hint of humor, or possibly pleasure, I couldn’t tell.  More swats followed, along with Violet’s grunts and protests.

“Shut your mouth and take your punishment,” he hissed, slapping her thighs and prompting a louder yelp.

I’d never been so close to someone else getting spanked, yet the scene seemed far away... I felt removed, as if sitting in the audience of a Broadway show, watching actors play out a modern version of something Shakespearean.  Paying attention was a challenge because anytime I saw Violet’s red bum, my heart rate sped up and hands got sweaty in anticipation.

“Bro, okay, that’s enough,” she said, standing and reaching back to rub the sting away.

The fury in Gabe’s glare made me shiver.  “Did I say you could move out of position?”

“Fuck off, it’s not that serious.”  Her lips curved up in a slight grin, and I knew she was enjoying every second.

Staring at her intensely, Gabe unbuckled his belt, whipping it out of the loops and folding it over.  “You think it’s cute to be disrespectful in the middle of a punishment?  We’ll see how you feel when we’re done.”  He inched towards her, flicking her shirt.  “Strip.  Let’s add in a little more degradation since the pain isn’t enough.”

Gabe looked up and sought approval from everyone.  The others agreed, but I buried my face in Izaak’s bicep, refusing to make eye contact.

“Seriously??  Ugh, such bullshit,” Violet grumbled, slipping the shirt over her head and tossing it aside with her bra to follow.  She stood more confident than ever, bony shoulders back, cherry red bottom sticking out, stomach sucked in a little.  I couldn’t take my eyes off of her aesthetically sculpted shape.

Gabe seized her by the hair, and the pair moved towards us.  Izaak strode to one of the vacant chairs so that Gabe could hoist Violet over the arm of the sofa.  My heart skipped a beat when my boss’ fierce scowl landed on me.  “Hold Violet’s hands while I’m whipping her.  And don’t let her reach back, or you’ll trade positions.”

My eyes widened, and I looked at Izaak, wondering if he’d let Gabe do that. Then Violet’s bony arms extended to my lap, and she looked up at me, flipping her purple hair out of her face. “This is bullshit!” she said, reaching for my palms as Gabe landed the first lash. The biting pain caused her to squeal and shout, “fuck!”

The deafening sound of leather meeting flesh made me jump each time.  Gabe swung the belt much heavier than Izaak ever had with me, and Violet kept almost breaking our grip, only remembering at the last second when I re-squeezed her fingers.  I squirmed when she shouted obscene words at him, something I’d never do with Izaak, and was met by Gabe with harder swats, sometimes on the thighs.

When he finished up, he put his belt back on while Violet grumbled in pain.