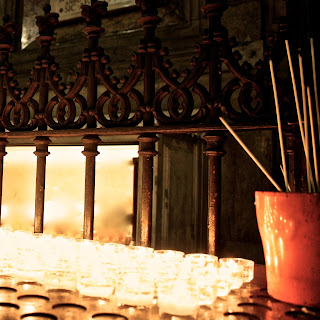 Part of the Stabler Girls series.  Lenore feels bad that someone else got in trouble because of her actions, and confesses her crimes to her father.

Playing With Fire
by Breanna and Lenore

Lenore stood next to her best friend, Jenny, feeling bad, as they watched two boys get hauled off for 'starting a fire'. Though, really, the boys hadn't. She wanted to come clean and admit it was her and Jenny who had done it.... But...Jenny had threatened not to be her best friend anymore if she tattled. Now, she was stuck with the dilemma.

Besides, she was scared. They hadn't meant to set the leaves and grass on fire. Only the small pile of leaves in the dirt was supposed to catch flame.

She went home that night, still not feeling so great. She even disappeared to her room early and went straight to bed. She was trying to feel better; her stomach was in knots.

Two days later, and her stomach was still the same as it'd been that first day. For the past two days, she'd been begging Jenny to go with her to the office and confess. She told her friend how this secret was eating her alive, and just how horrible she felt - but Jenny didn't care. Jenny didn't want to be in trouble. Jenny said it was just an accident and those boys were only suspended for a week, so it was no big deal.

But, to Lenore, it was a big deal. And she knew to her father it'd be an extremely big deal, which just made her feel even worse.

Finally, she made a decision she knew that Jenny - and her bottom - was going to hate her for.

Lenore nervously made her way into the living room, late that night, though she was supposed to be in bed. Her father sat on the couch watching T.V. while going over case files.

She took a deep breath, and finally spoke. "Daddy...." She said softly, as she wrung her hands nervously.

Elliot jumped slightly, having been startled by his little one, standing there in her nightgown, looking like she'd stolen the cookie out of the cookie jar. "Hey, sweetie, why aren't you in bed?"

He raised his eyebrows, turning off the TV and turning toward her. "What's up, kiddo?" he asked, pulling her in and sitting her on his lap.

Lenore snuggled into him, trying to work up her courage. She'd made it this far... She swallowed hard as she felt tears fill her eyes. "My tummy's not happy..."

Lenore started to cry then. "Daddy, you're gonna be sooooooooooooo mad at me!"

He kissed her forehead then turned her around to face him, looking her in the eyes. "What's wrong, Lenore? What happened?" he asked softly, tucking a lock of hair behind her ear.

"Jenny said not to tell anybody...but I can't keep quiet no more! I feel too bad!" Lenore blubbered. "I didn't mean to do it Daddy! I didn't know it could happen so fast! I didn't mean for somebody else to get in trouble for it! But Jenny said she wouldn't be my best friend anymore if I told anyone what we'd done!"

Elliot tried to make since of what his daughter had just said... but she still hadn't answered his question. He was started to get really worried actually. "Lenore? Please just tell me what it is..."

Lenore wiped at her eyes, unable to stop her tears. "We started that fire in the school yard! Not them boys!" She sobbed. "I didn't know if we caught the leaves on fire, that everything else would catch fire too! Jenny said it wouldn't! And then we ran and let them boysÕ get in trouble for it. But they didn't do it! Jenny wouldn't let me tell!"

Elliot took a deep breath in, soaking in this newfound information. "You... caused the big fire?" He asked softly. "How?"

"Jenny brought her sister's lighter to school," Lenore explained, amidst her tears. "We made a little pile of leaves in the dirt by the tree...I killed my favourite tree!"

"Lenore... baby... why on earth would you play with fire like that?"

"Young Lady... why are you listening to Jenny about fires when you have heard from plenty of adults the dangers of playing with lighters or matches? Doesn't Smokey the bear come visit you?"

"She's my best friend," Lenore said plainly. "Well, she was... She's gonna hate me for telling. But Daddy, I HAD to tell you! I feel so awful!"

"And now you're going to have to tell your teacher," he said. "Those poor boys got in trouble for something *you* did. And don't you know exactly how it feels to get blamed for someone else's naughty behavior?"

He sighed. "You do realize you're getting a spanking for this, right?"

Lenore nodded, as she snuggled into him, hiding her face in his chest. "Yesss... But I had to tell you... I'm sorryyy..."

He patted her back for a moment, letting her compose herself.

Lenore finally managed to calm herself a little bit, though she stayed snuggled into his chest.

"I know you are, sweetie. Let's get your spanking over with."

"I know. This will help take some of the guilt away," he said, pulling her away and pushing her hair out of her eyes. "Come on, kiddo, over my lap."

"It's gonna be a big one, isn't it?" Lenore asked softly, her lower lip trembling dangerously, as her eyes re-filled with tears.

She squirmed a little.

"Yes, baby, it is," he said, easing her toward him and patting his lap for her to go over.

Lenore closed her eyes a moment, as she took a deep breath. She then managed to lie over his lap. "I'm sorry," she managed to squeak out as her voice cracked.

"I know," he repeated and began to reign down smacks over her nightgown. He covered her entire backside with medium force and began to lecture. "Young Lady, you know better than to play with fire, don't you?"

"Yesss!" Lenore sobbed, as she squirmed over his lap.

"And to allow someone else to take the blame is simply unacceptable. If Jenny isn't going to do the right thing, then you need to step up and be the bigger person, whether you lose a friend or not." He continued the spanking, now lifting her nightgown up to deliver some swats over her panties.

Lenore wailed loudly, as she clutched tightly to his pant legs. "I'm sorryyy!"

He gave her a few smacks on the sit spots then pulled her panties down. "And you know how I feel about dishonesty, Lenore. You should be ashamed of yourself for your behavior."

Lenore could feel her stomach knot at that. She'd tried her hardest to be honest, but the threat of losing her best friend had stalled it.

Elliot started the spanking back up giving her harder swats this time. "So what will you do if Jenny tries to get you to play with fire again?" he asked.

"I woooon't!" Lenore shrieked, her hands flying back.

Elliot nonchalantly grabbed her wrists and pinned her hands down. "You better not," he said. "And what are you going to do if Jenny tries to get you to be dishonest again?"

He spanked her now bright pink bottom now, covering each of her cheeks and sit spots, keeping a firm grip on her so she wouldn't move so much. "I'm very disappointed in your behavior, Young Lady," he said.

He stopped for a moment and lifted her up. "Go get the ruler please," he told her.

"Noooooooo!" Lenore whined, as she did a little spanking dance, her hands on her bottom.

Elliot gave her a look to show her that he was serious. "Lenore," he said firmly. "The ruler."

"I'm sorry...I got angry...." Lenore admitted through her tears.

"Okay. Get the wooden hairbrush then."

Lenore whimpered as she did as she was told. She began to cry though, upon returning with it.

"All right, kiddo, 10 swats." He helped her back over his lap. "I hope that this is a lesson for you, Lenore."

Lenore buried her face into the couch cushion and placed her hands behind her. "Hold them, please, Daddy...." She sobbed.

"Of course," he said, taking them in his hands. He lifted the brush then and gave her the first swat in the middle of her bottom, then reigned down the next, giving her a break after five hard swats.

Lenore lie over his lap, sobbing her little heart out. "No mooooooooooore!" She pleaded.

"Halfway finished," he told her, giving her the last five in a quick motion, then sitting the brush down and scooping her into his arms. "All over now baby," he said gently and rocked her back and forth.

Lenore clung to him tightly as she sobbed into his chest. Playing with fire was definitely NOT worth this at all.
By Breanna at December 28, 2010